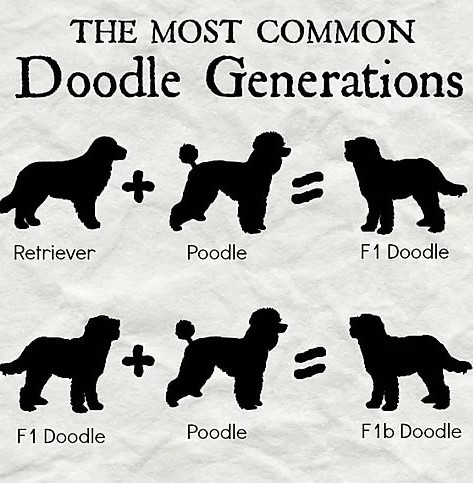 If you are really interested in getting a St. Berdoodle, you must have certainly seen some kind of acronyms like F1 and F1B. You must have also wondered what the F1 and F1B St. Berdoodle actually mean? Designer Dog Breeds are the new tendency in the canine world. It consists in mating two different dog breeds to create a unique dog. Some people think that designer dog breeds are healthier because when we mix two different breeds, we are creating a wide variety of characteristics when the dog’s DNA is enriched. The enrichment of the genes is known as Hybrid Vigor.

To begin the process of creating a designer puppy, we cross (Pure Breed A) x (Pure Breed B) = F1

These acronyms stand for the specific St. Berdoodle generations. Since the St. Berdoodle is a crossbreed between the Poodle and St. Bernard, the percentage of St. Bernard and Poodle can differ between each generation and is only a perfect science in a lab. Like all species, we all receive certain traits or genetic material from both parents and those traits will vary, just like brothers and sisters do not look the same. This can be seen in a litter of puppies that all look different even though they are from the exact same parent set. Both F1, F1B, and F2 St. Berdoodles are amazing and beautiful dogs. Still, there are some significant differences between them in terms of coloring, appearance, the amount of shedding, hypoallergenic-ness, ease of grooming, and more.

Knowing these differences will assist in deciding which one would be well-suited for you and your family. This post will hopefully help decipher these acronyms’ meaning and explain the main differences between F1, F1B, and F2 St. Berdoodle. Please keep in mind that while the trends in genetic crosses (hybridization) does not guarantee perfect percentages and are only for reference. The only way to truly get exact percentages of the hybridization, specific traits, or characteristics are through genetic manipulation in a lab. Additionally, there are both dominant and recessive genes in all species that will appear at different times through the breeding process.

First of all, let’s break down the actual meaning of “F1” in the word “F1 St. Berdoodle.” The letter “F” represents the word “Filial,” which basically means that the dog is not purebred but a crossbred or Hybrid dog. Every St. Berdoodle is a crossbred dog between a Poodle and a St. Bernard, so the letter “F” will be included in their generational name. The number “1” refers to the first-generation offspring between a Poodle and a St. Bernard. Simply put, F1 means the first filial generation of offspring of specifically different parental types.

What Does F1B Stand for:

The meaning of F1B is like F1, except the letter “B,” which stands for “Backcross.” Backcross simply means that an F1 dog is a backcross bred with a 100% (purebred) parent breed. The letter “F” still stands for “Filial,” which basically means it’s a crossbred canine, and the number “1” also means it’s the first-generation offspring between a St. Bernard and a Poodle. Therefore, F2 means the second filial generation of offspring of specifically different parental types.

What Is a F1 St. Berdoodle:

What Is a F1B St. Berdoodle:

Both F1 St. Berdoodle and F1B St. Berdoodle are almost similar in appearance but slightly differ in coat types and size. Let us compare their coats and also consider their sizes.

The first generation of St. Berdoodles certainly has the best health traits because they have the highest hybrid vigor. Now, let us compare both the F1 and F1B and see which one has the better health advantage.

One of the best things about the F1 St. Berdoodle is they have a health benefit known as Hybrid Vigor. Hybrid vigor simply means that a hybrid dog will be healthier and more robust than its purebred parent dogs. This is because the inbreeding of purebred dogs allows the same genetic defects to be transferred to each successive generation continually. The F1 St. Berdoodle is excluded from this because it is a crossbred dog. So it will typically only inherit genetic disorders that are common to both parents, the Poodle and the St. Bernard.

Whiskey's litter of F1 St. Berdoodles are on the way!